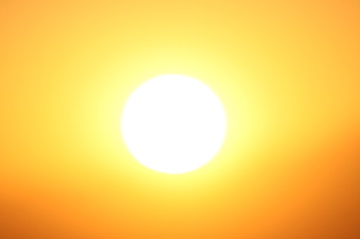 When I was a teenager, my summer’s goal was to get as tan as possible, so needless to say, my friends and I spent a good portion of our summertime sun bathing as much as we could.

And to make matters worse, no sunscreen for us, no sir, we used baby oil to bake our skin.

Sunscreen was for sissies.

I still remember the lectures (that went unheeded) from my dad about too much sun exposure.

That I would get wrinkly, leathery-looking skin when I was older, that I could get skin cancer if I didn’t stay out of the sun, and that I needed to be slathering myself with chemical-laden sunscreens.

Well, eventually the super summer bronze glow became a thing of the past, as free time was replaced with college, full-time jobs, and families.

As a fair-skinned blonde, I worried about my skin.

Would I become wrinkly and leathery-looking by the time I was 30?

I watched and waited, and it never happened.

Never a fan of expensive creams, lotions, potions and cosmetic medical procedures, I just used soap and water and hoped for the best.

What I did not realize at the time was that the diet I was eating was helping my skin tremendously.

I actually reversed the sun damage with my healthy diet.

Today at 51, my skin is smooth, soft and relatively wrinkle-free—far from the leathery, wrinkly face my father predicted.

I’m now experiencing another phenomenon—as a competitive cyclist, I spend long hours out in the sun riding my bike. Since most conventional sunscreens are full of chemicals that are far worse than the sun exposure and cause more damage with their poisonous chemicals than the sun itself, I am not a big fan of sunscreens.

But, surprisingly enough, I rarely get burned out in the sun, just lightly tanned most of the time.

What is going on?

Turns out, my diet has come to the rescue, again.

A recent study shows omega 3 fatty acids actually protect the skin from the inflammatory response (sunburn) after too much sun exposure and that these super nutrients also reduce the risk of some skin cancers.

The study’s findings also show that omega 3 fatty acids play an important role in preventing and reducing the damaging effects of sun. In humans, omega 3 fatty acids also increase the time it takes to become sunburned, the review concluded, very similar to what sunscreens do.

In experimental animal studies, the reviewers noted, there is direct evidence that dietary omega 3 fatty acids inhibited the cancerous changes that occur after ultraviolet radiation, including decreasing tumor growth and reducing the cancer cell’s ability to multiply.

So the “Standard American Diet” that most Americans consume containing the skewed higher ratio of omega 6 fatty acids to omega 3’s not only contributes to a worse sunburn, but it also contributes to the aging effect of sun on the skin.

It is a known fact that people who regularly eat a diet higher in saturated fats and omega 3 fats have much smoother, softer skin.

In contrast, a diet high in trans fats and omega 6 fats ages skin and those that consume that type of diet have older-looking skin and wrinkles.

So obviously, the best way to avoid damaging your skin and minimizing the effects of sun damage start on the inside, not the outside.

Lets look at ways to best protect our skin from the inside out:

One of the best ways to prevent sun damage, while absorbing healthy vitamin D, and protect your skin, is with diet. Your body can actually create its own natural sunscreen with the right dietary components:

“Epidemiological, experimental, and mechanistic data implicate omega 6 polyunsaturated fatty acids (PUFAs) as stimulator’s and long-chain omega 3 PUFAs as inhibitors of development and progression of a range of human cancers, including melanoma”.

In studies with lycopene, it was shown that people who consumed 55 grams (5 tablespoons) a day of lycopene in tomato paste had 33% more protection against sunburn compared to a control group after 12 weeks. It also boosted the level of procollagen in the skin, which suggests potential reversal of the skin aging process.

Bottom line–if you must spend a long amount of time out in the summer sun, you will probably need to protect your skin with a sunscreen too.

Most sunscreens contain inherent dangers as well, so choose carefully. While there is still some risk in spending long periods of time in the summer sun without sunscreen (even with a skin-healthy diet), the sunscreen itself can pose a bigger health risk.

The chemicals in sunscreen are very harsh and are rapidly absorbed into the bloodstream, and have been proven to cause several types of cancers. “Octyl-methacinnamate”, “phenylbenzimidazole sulfonic acid”, “octyl-dimethyl-PABA”, and “oxybenzone”, are all standard sunscreen ingredients. Numerous studies have raised concerns about these chemicals safety:

The best and most natural sunscreens are sunscreen products with zinc oxide and titanium dioxide as their active ingredients. Both block UVA and UVB rays, are natural, safe products for your skin and have raised no health concerns.

So this summer, protect your skin inside and outside with a healthy diet and natural sunscreen when needed. You will not only soak up the vitamin D with all its health benefits, but have soft smooth skin as well.Sources: Mercola, “If You Use Sunscreen, This is Urgent Information You Must Have”, May 13, 2010, Mercola.com. Shane Ellison, “Chemist Forces Children to Eat Sunscreen” www.thepeopleschemist.com 2008. Arathi, “How to Eat For Internal Sun Protection”, eHow.com, accessed May 7, 2010. Jennifer Barrett, “On the Bright Side”, Experience Life Magazine, July/August 2009, Lifetime Fitness. Black HS, Rhodes LE. The potential of omega-3 fatty acids in the prevention of non-melanoma skin cancer. Cancer Detect Prev. 2006;30(3):224-32.