I have been on a quest to find gluten free beer since I went totally gluten free about 12 years ago. I’m no big beer snob, but I do like a full bodied beer that has some degree of good flavor. And I’ve actually found some really good ones out there… 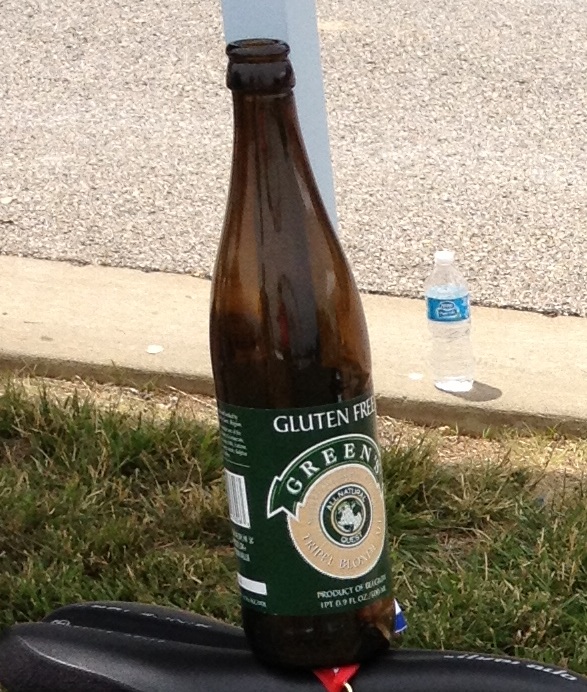 Ok, so I have been on a quest to find gluten free beer since I went totally gluten free about 12 years ago.

The first to appear about three years ago were New Grist and Redbridge. Redbridge is a product of the former AB, now InBev company.

Having gone so many years without a beer to drink, the first offerings in the gluten free beer fare were welcomed with some excitement. I’m no big beer snob, but I do like a full bodied beer that has some degree of good flavor.

I was not overly impressed with either Redbridge or New Grist. Gluten free beers most often have to rely on alternate forms of grain for brewing, and in doing so tend to lose a lot of the full-bodied flavor that most beers have. New Grist and Redbridge are made from sorghum. While I find Redbridge is a drinkable beer, and somewhat welcome in ice cold form on a hot day, I do not enjoy New Grist. I find it too sweet, lacking in any sort of character and a poor substitute for a beer.

St. Peters beer is another sorghum beer that I did NOT like. It was bitter and hoppy with little flavor to enjoy. Not worth trying other than the fact that it comes in kind of a cool bottle.

Branching out a little, I found Bards which, too is made from sorghum, but has a little more of a full bodied taste. It however tastes a bit too molasses-y and sweet for me, but it isn’t bad, and definitely has a different taste.

Daura, from Spain was a fairly recent find, and pretty darn good tasting. I like the fact that it tasted a little different, a little more like a real beer–full bodied and flavorful, with a slightly chocolate aftertaste. I can drink this!  Daura is actually made from a gluten free formulation of a barley malt, so it may taste a bit more like a real beer to those who really miss regular beer. While this process leaves microscopic amounts of gluten in the beer, it is classified according to international standards of “gluten free” which is only 20 ppm of gluten. Good if you are gluten sensitive or avoiding gluten for other reasons, but I would probably avoid it if you are extremely gluten sensitve.

My favorite discovery was Green’s line of beers. Here are some tasty viable alternatives for lovers of craft beer. These are beers from Belgium (they do know their beer there!) and consist of three, well-flavored and full-bodied beers. Green’s uses buckwheat in their beers, giving it less of a sweet taste and a little more of that roasty, toasty ‘real’ beer taste. Their line includes Green’s Discovery, an amber beer—and my favorite;  Green’s Endeavor, a Dubbel–WAY too sweet, malty and heavy for me, and Green’s Quest–a kick you in the butt Tripel beer with good flavor and a high alcohol content.  Be careful with these beers. Not only do they come in a larger, craft beer sized bottle, but they contain pretty high alcohol content, so you are getting twice the beer that you would get in a regular sized bottle. Quest carries a hefty 8.5% alcohol content, with Endeavor at 7%, and Discovery at 6%.

And…[drum roll please!] new on the St. Louis scene at bars, restaurants and Whole Foods is the newest addition to the gluten free lineup of beers. This one is actually supposed to taste great and will taste much like a regular (real), good tasting lager or pale ale.
This new beer is the result of several years of formulation by an Oregon microbrewery, Craft Brew Alliance.  These beers are actually brewed with malted barley (normally an off-limits grain for Celiacs), yeast, hops and water in a special process that removes the gluten from the barley. The chief executive of Craft Brew Alliance was actually diagnosed with celiac disease along with his wife, so he has a personal reason to find a good gluten free drinakable beer.  He has worked hard at developing a good tasting gluten free beer, and it looks like it’s here. “Omission” will make its appearance on the shelves at Whole Foods in Brentwood this Friday, June 22, and at other stores and restaurants in the area as well. I will be one of the first in line to taste this new concoction!

So that’s my basic take on gluten free beers. I may not have covered all of them and there are some great regional gluten free beers,  but these are generally the selection we have here in St. Louis. There is a life after going gluten free, and beer is one of the things you don’t have to suffer without.

P.S. Just got the Omission Pale Ale and I felt guilty drinking it! It tastes like REAL beer! I have to say, even those who are not gluten free will like it.

Stay healthy and lean and refreshed!

Look for my new book, “The Flat Belly Kitchen” out on Amazon Kindle soon!