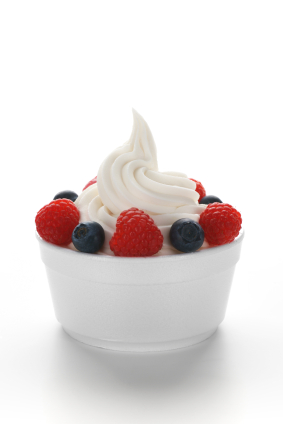 Have you joined the newest frozen 'treat' craze?

I'm talking about frozen yogurt. It seems there's a new frozen yogurt place opening on every street corner lately. And, not only do they try to come across as delivering "smart and healthy" treats, some of these places try to sound even healthier with flavors like "Dr. Coconut" and "Dr. Green Tea".
The idea behind the marketing of all these places is that frozen yogurt is great as a "diet" food, and it is also good for your health–making you skinnier and addressing health flaws from bad eyesight to wrinkles and more.
It even comes as "fat-free", "sugar-free", and infused with vitamins and antioxidants as well.
Well, it sounds good doesn't it?
Health fanatics have been smugly spooning up the stuff like crazy!

Do you know what's really is in frozen yogurt?
Well, most people think it is just that. Frozen. Yogurt.  Isn't that healthy?
It sounds like it should be…
Well, I hate to be the bearer of bad news, but this stuff is kinda one of those sneaky so-called 'diet' foods that actually makes you fat…
In fact if you look at the ingredients of this frozen concoction offered by some of the bigger chains (and most all frozen yogurt is made with the same basic ingredients), you will see that the primary ingredients are sugar of some form and milk.
In spite of all the health claims, frozen yogurt is basically a sugary, processed dairy dessert with some probiotics and yogurt powder thrown in to make it seem healthier.
Unfortunately, however, it flunks as a low calorie, fat burning dessert.
While specific ingredients and amounts vary from brand to brand, and from chain to chain, most frozen yogurt contains nonfat milk and dried milk, yogurt powder, sweeteners in several forms including corn syrup, maltodextrin (from corn) dextrose (from corn), fructose and more; milk solids, emulsifiers like mono and diglycerides, propylene glycol esters, guar gum and other thickeners, natural and artificial flavoring and coloring (even when the yogurt is white).
The tangy frozen yogurt flavor comes from the strains of lactobacillus bulgaricus and streptococcus thermophilous, though the bacteria only makes up about one percent of the ingredients. And, really, ice cream is made from the same basic ingredients as frozen yogurt; it's just that ice cream does not contain the bacteria cultures.
As you can see from the ingredients list, frozen yogurt is basically just lower fat ice cream with extra sugar, thickeners, and some yogurt powder with probiotics thrown in for good measure.
Do the probiotics somehow make it healthier?
Seriously, just because there are probiotics in something doesn't make it a 'health' food!
People who wouldn't dare eat ice cream have no qualms about eating massive amounts of frozen yogurt on a regular basis–thinking they are doing their bodies good, when in reality they are just making their blood sugar go crazy–and contributing to weight gain.
Yogurt compared to ice cream is basically what "low fat" snacks are to regular snacks.

Removing the fat and adding in more sugar does not make it healthier or a better diet food.
It's actually worse, since all that sugar raises your blood sugar, stimulates your insulin response, makes you store calories as fat, and makes you hungrier later.
The trouble with foods like frozen yogurt, which are sometimes labeled "low fat" "diet" or "healthy," is that people sometimes think they can consume large portions because they APPEAR to be less fattening, and therein lies the problem–this stuff is NOT less fattening!
It is very fattening and high glycemic (raises the blood sugar and causes calories to be stored as fat). Even worse, there is a "sugar free" version out there! It's usually sweetened with toxic artificial sweeteners like NutraSweet or Splenda.
You're not doing yourself or your body any favors with that stuff.
When an ice cream craving hits, it's probably better to satisfy it with a small amount of the REAL thing and avoid the frozen yogurt craze all together.
Truth is, if you are regularly eating a healthy, fat burning diet and eating healthy fat burning foods like you'll find in The Fat Burning Kitchen Program, exercising, and avoiding sugary processed foods 99% of the time, you are better off with a small serving of REAL ice cream. (Just make sure it's the all-natural kind without corn syrup, fillers and preservatives).
The butterfat in ice cream gives it that creamy flavor and so a smaller amount should be more satisfying than sugary, processed, low fat, frozen yogurt–probiotics or not.
And butterfat contains CLA (conjugated linoleic acid) which is a potent anti-cancer and fat-burning type of fat.
Just remember, moderation is the key.

Better yet, if you are really craving something smooth and creamy, but want to stick to a good fat burning diet, try this instead, and you won't even have to feel guilty a bit:
Coconut Cream "Ice Cream"

Puree in food processor.
Make in an ice cream maker according to directions, or pour into ice cube trays and freeze 4 or more hours. If making in ice cube trays, remove from freezer about 15 minutes before serving and puree again and serve.
This is extra good sprinkled with some nuts or toasted unsweetened shredded coconut. See more delicious fat burning recipes in the new "Fat Burning Kitchen Superfoods Recipe book " coming soon!
Take care and stay healthy and lean!