I thought I would make chicken in the crockpot, but really had no idea what I was going to do with it, so I just made it up as I went.
I used organic chicken thighs, and threw it in the crock pot semi-frozen with some cumin, chili powder, tomatoes and green chilis. A few hours later… 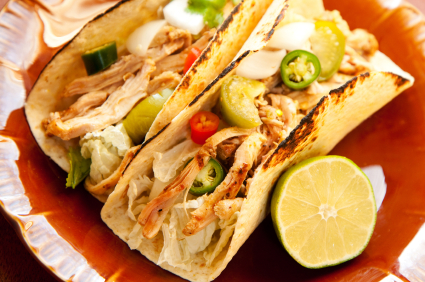 I just made this up today, and wanted to share it with you. I’m pretty sure you will think it is as delicious as we did.

I thought I would make chicken in the crockpot, but really had no idea what I was going to do with it, so I just made it up as I went.

I get my chicken from Costco. It’s organic chicken and it comes in (I think) 2lb separate servings and there are three to a package. It’s a great deal too.

I like chicken thighs, because the meat actually has more nutrients in it, since it is a muscle that gets used more. More use means more nutrients, like iron, in the meat. And now you can find boneless, skinless chicken thighs at most stores, and they usually are less per pound than the breasts anyway.

So, I had one of those 2 lb. packages and threw it in the crock pot semi-frozen (had started thawing it out the night before).

Turned the crockpot on high for about an hour to get the chicken thawing and cooking.

Tablespoon or so of chili powder

2 or 3 Teaspoons of cumin

1 can of fire-roasted organic, chopped tomatoes with green chilis

1 cup of water or chicken stock

Handful of cilantro, chopped for garnish when done cooking

Keep in mind, I don’t measure ingredients, I just start throwing in stuff, so all the measurements are approximate.

Cook on low 4-6 hours or until done and tender.

[At some point if you threw your chicken in half frozen like I did, you may want to just break the chicken apart or cut it up in smaller pieces.]

Add a can of black beans if you would like.

Then you can serve in soft tortillas with sliced avocados and lettuce, or serve over brown rice or quinoa.

Note: If it’s really juicy/saucy, then separate chicken from sauce and serve sauce on the side or save to make chicken tostada soup with the leftovers.