While we generally don’t hear a lot about them, genetically modified foods could have some serious consequences on our health.
While there have been no ‘official’ studies done on humans, some of the effects GM foods have on animals is pretty frightening. The thing is, GM foods are not just for animals. In fact over 80% of soy, corn and cottonseed are now genetically modified.

I have sort of ignored all the noise about Genetically Modified foods, thinking it didn’t apply to me, etc. Well, once I started researching this particular subject, I realized how scary this stuff could be.  I will be sure to totally avoid all genetically modified foods from now on.

While we generally don’t hear a lot about them, genetically modified foods could have some serious consequences.

While there have been no ‘official’ studies done on humans, some of the effects GM foods have on animals is pretty frightening. The thing is, GM foods are not just for animals. They are well entrenched in our food supply. In fact over 80% of soy, corn and cottonseed are now genetically modified.

Animals fed genetically modified grains or seeds like corn, soy and cottonseed end up with problems with infertility, immune function, accelerated aging, insulin instability, and unhealthy changes in organs, including the GI system.

Genes have actually been added to some soy as a built in insecticide. But these genes are thought to be able to transfer themselves into the DNA of our intestinal flora, so when ingested, they may keep functioning. What you could end up with is something like a human pesticide factory within your GI system, long after the genetically modified food has been eaten.

Here are a few of the reactions that animals have had to some genetically modified foods:

Because GM foods contain increased amounts of phyto-estrogens or plant estrogens, they could contribute to excess weight gain, gynecomastia (“man boobs”), and stubborn belly fat as being a factor in some cancers and other serious health issues.

Genetically modified foods now contain new and unknown substances that have never been present in nature before.

Do you want to trust this? I sure don’t. We have no way of knowing what kinds of ill health effects they can produce in humans, especially if you look at some of the negative reactions that animals have had to GM foods.

Similar to so many other chemically altered foods, there have been no long-term studies done on the safety of GM foods. Looks like once again we will be the human guinea pigs.

So this leaves it up to you, to protect your own health and avoid these biological experiments.

How do we escape the possible health consequences of genetically modified foods?

The most common genetically modified foods are:

Around 80% of these foods are now genetically modified, unless they are organic.

And that’s not all the genetically modified foods:

Rice–Allegedly, there are reports of rice varieties containing human genes to be grown in the United States. Genetically modified rice can cause allergic reactions and gene transfers.

Tomatoes–Tomatoes have been genetically modified for longer shelf life. In studies on animals, the animal test subjects died within a few weeks after consuming GM tomatoes.

Rapeseed or Canola Oil—Canola oil is often used in cooking oil and margarine spreads. A variety of canola oil developed in 1998 is considered to be the most disease- and drought-resistant variety of rapeseed to date. Today about 80% of the acres sown are genetically modified canola. Honey often comes from GM canola plants as well.

Peas—GM peas contain a gene that functions as a pesticide inside cells, and could cause an an allergic response when eaten.

NutraSweet and Equal—According to some reports, these artificial sweeteners are created with genetically modified microorganisms. While this stuff is bad for you in many ways, here is just one more reason to avoid it.

I don’t know about you, but I certainly do not want this stuff in MY body!

Besides the health issues that have appeared in animals, who wants their DNA altered? Eating genetically modified foods could cause weird forms of cancer and other deadly diseases—and some new diseases that modern medicine has never seen before. That’s a dangerous gamble I’m not willing to risk with my health.

A biotechnology scientist had this to say about GM foods:  “For the first time in the world, we’ve proven that GMO’s are neither sufficiently healthy nor proper to be commercialized. […] For all three GMOs, [soy, corn, cotton] the kidneys and liver, which are the main organs that react to a chemical food poisoning, had problems…”

How do we avoid genetically modified foods and their potential health problems?  It’s easy if you follow a natural, healthy diet.

Avoid the packaged, processed foods, especially those containing soy, corn, sugar and vegetable oils. These foods are terribly unhealthy, full of chemicals, and cause inflammation and fat storage anyway.

Genetically modified foods look exactly like any other foods, so you can’t tell by looking at them if they are or not.

Produce like tangelos, seedless watermelons, seedless grapes, low acid tomatoes, and other new varieties of fruit and vegetables are created by natural breeding, not genetic modification, so these foods are fine to eat.

The bottom line is that genetically modified foods have not been tested and we don’t really know whether these foods are safe to eat or not.

We may probably never really know the real harm genetically modified foods can cause, because of the length of time it may take diseases to develop. If you take a look at the health problems that genetically modified foods are causing in animals, it should be a fairly easy assumption that they can and will cause serious, and often deadly health issues in humans as well.

Just one more reason why paying attention to the food you eat, and eating a diet of only REAL, natural foods is extremely important.

Jeffrey Smith, Wise Traditions in Food, Farming and the Healing Arts, the quarterly magazine of the Weston A. Price Foundation, Spring 2008.

www.Foodmatters.tv, The truth is out on GMO foods and it’s not pretty. May 2009. 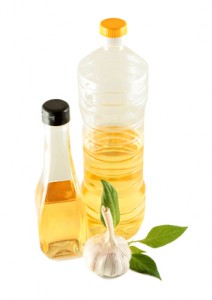 Cooking Oils seem to be an ever changing debate.

We had it drilled into our heads that we should all avoid lard, butter and saturated fats.

But are vegetable oils any better?

New research says that vegetable oils may actually be contributing to the diseases they were meant to prevent.

And what about cooking with oil? What oils are ok to heat and what oils should NEVER be heated?

Many of the so-called 'healthy' oils are really bad for our health, and many of those oils and fats we were told to avoid may actually be good for us.

My good friend and fitness and nutrition expert, Mike Geary has an excellent article on oils that I wanted to share with you. In it, he clears up some of the confusion on which oils are good for us and which ones are bad for us.

You may be in for a surprise!

Check it out here: